What Is a Tsunami, Anyway?

Home › Earthquakes › What Is a Tsunami, Anyway?

What Is a Tsunami, Anyway?

Early in the morning on Saturday, January 15, 2022, many west coast Canadians received a notification from their local alert system: a tsunami advisory notice. We were instructed to stay away from beaches and marinas due to increased tidal currents until the advisory was lifted. Thankfully, there was no need for evacuation in our area. 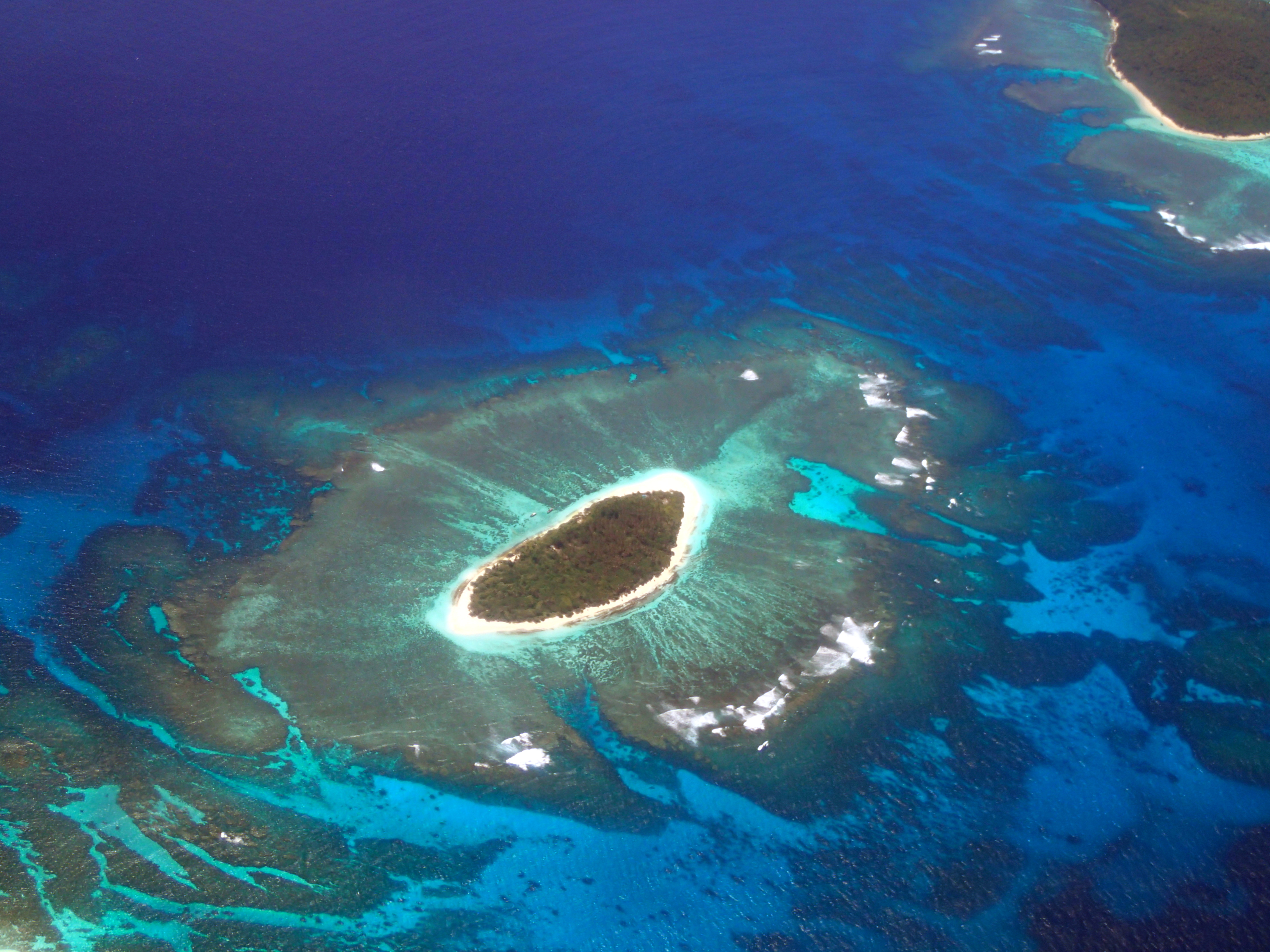 The advisory came as a result of an underwater volcanic eruption near Tonga, a tiny nation in the South Pacific, over 9,300 km away. We would later learn that low-lying settlements along the islands’ shores had been totally wiped out by the 1.2-metre tsunami wave.

To understand why, let’s talk about the difference between the kind of waves that make for good surfing and the much-feared tsunami.

Normal surface waves like those in Hawai’i and Tofino are formed by a combination of wind and the slope of the seafloor, which causes them to slow down and grow taller as they approach shore. Known as “breaking” waves, these short, frequent swells mostly stay within the bounds of the tide.

Tsunamis, on the other hand, come from a massive displacement of water. To visualize, have you ever gotten into a full bath tub, only for the water to slosh over the sides because it had nowhere else to go? That’s what happens on an ocean-wide scale whenever an earthquake or volcanic eruption occurs. The force of the event sends a surge of water away from itself in all directions at speeds of up to 800 kilometres per hour over the open ocean.

That spells bad news for any islands and shores in the way.

Another key difference between normal wind-generated waves and tsunamis are their wavelengths.

According to tsunami.org, wind-generated waves come frequently (between five and twenty seconds between each one) and have a wavelength of 100–200 metres. Tsunamis can have a period ranging from ten minutes to two hours between them, with wavelengths often topping 500km.

What does that mean?

In short, a shorter wave loses more energy the further it travels. Tsunamis are not short and therefore do not lose nearly as much energy as they travel. Their speed is directly related to the depth of water, and each wave will maintain a fairly constant speed over deep ocean until reaching shallow or coastal areas.

If a tsunami passes under a ship sailing on the open ocean, those aboard the vessel would not be able to feel it.

Eventually, however, tsunami waves will make landfall. While breaking waves always have distinctive crests and troughs, tsunami waves may take on many forms. They may appear as a rapidly rising tide, a series of breaking waves, or even a tidal bore. The shape and slope of the seafloor as well as the geography of the landmass all play a major part in its size and severity.

A tsunami hitting an abrupt barrier will have a higher wave but will not travel as far inland. Image by -Ilhador-, Public domain, via Wikimedia Commons

A tsunami traveling over a shallow incline before hitting land will not be as tall, but will travel farther. Image by -Ilhador-, Public domain, via Wikimedia Commons

How a Tsunami Operates

A tsunami slows down when it hits shallow water, and its height relative to normal sea level increases. This is why it is often described as a rapidly rising tide; it behaves in a similar way, only there’s a lot more of it at once. The longer the slope of the seafloor, the more ‘runup’ the wave gets and the farther inland it will go.

Unlike a powerful wave that breaks on shore and recedes, the tsunami brings with it unimaginable power—the power of the earthquake, volcano, or other force caused it in the first place. The resulting floodtide will sweep away vegetation, buildings, and vehicles alike, often carrying debris far inland.

Why Does the Ocean Recede Before a Tsunami?

As we have learned, tsunamis behave like tides. In a normal tidal cycle, the tide must go out before it comes back in. The ocean recedes before a tsunami because all of that water has to come from somewhere.

You can observe a similar phenomenon on a small scale with normal beach waves. After crashing to shore, the water pulls back to become part of the next wave.

Thankfully for most of Tonga’s residents, the beaches were already closed due to ongoing volcanic activity in the area. Local authorities advised citizens to stay indoors and protect drinking water and resources in anticipation of an eruption.

Within minutes, the first wave hit the shore.

While tsunamis have always been a risk for those who live in coastal areas, they entered global awareness in 2004 when an earthquake and subsequent tsunami devastated the nations surrounding the Indian Ocean.

Overnight, it became common knowledge that rapidly receding water signaled an incoming tsunami. This knowledge has saved countless lives since: Instead of gawking at the phenomenon, bystanders now know to get to higher ground. 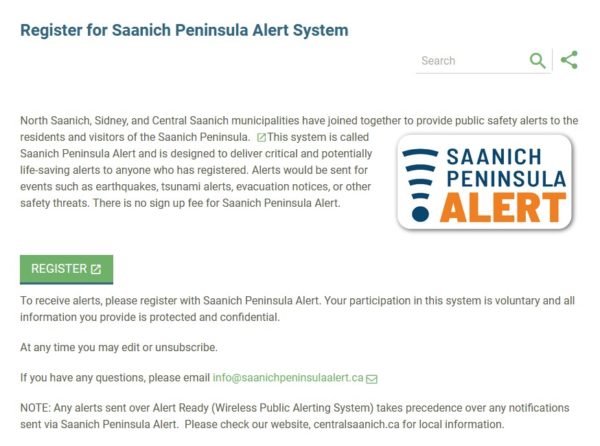 A screenshot of the Saanich Peninsula Alert System page, captured by the author on January 20, 2022.

While not perfect, local alert systems are designed to communicate impending dangers as soon as possible. For instance, the Province of British Columbia has an automatic system called Alert Ready for use during large-scale disasters or emergencies where loss of life is possible or imminent.

Your community or region may also have an alert system in place, such as the Saanich Peninsula Alert System. Check your local municipality’s website for more information on how to sign up.

What to Do When You Feel a Quake

When an earthquake strikes close to home, however, time is of the essence. First, follow proper earthquake procedure: Drop, Cover, and Hold On.

Time how long the shaking lasts. The Red Cross’s list of tsunami warning signs includes earthquakes which last 20 seconds or more near the coast. After the shaking stops, count out loud for 60 seconds in case of aftershocks.

If you are in a tsunami zone and the earthquake lasts longer than 20 seconds, don’t wait for an evacuation alert. Leave immediately once it is safe to do so—the earthquake is your warning.

Flee on foot if possible to keep the way clear for emergency services.

What to Do if the Earthquake Causes a Tsunami

Not every earthquake will generate a tsunami, but if one does occur, knowing what to expect will help you act quickly and decisively.

As we’ve learned in this article, tsunamis carry a lot of power behind them. Get as high as you can or as far inland as you can as quickly as possible.

If your route is blocked or you are otherwise unable to flee, the Red Cross recommends you “evacuate vertically to a higher floor, a roof, up a tree, or grab onto a floating object.”

Do not enter the floodwaters after reaching a safer location. More waves may be on their way, and strong currents may lurk under the surface—even 6 inches of fast-moving water is enough to knock an able-bodied adult off their feet. Additionally, floodwaters can obscure other hazards like sharp edges or electrical lines.

If you have a cellular signal, limit yourself to text messages only as much as possible to reduce the load on the network and keep voice lines open for emergency personnel.

Dangers After a Tsunami

Tsunamis can create additional hazards that will remain dangerous long after the waters have receded. Be wary of downed power lines, debris, and hazardous material spills. Groundwater will likely be contaminated and unsafe to drink for some time. Damaged power lines or gas leaks may cause fires. A sturdy pair of shoes and some thick gloves can go a long way to keep you safe if you need to navigate rubble and detritus.

How to Prepare for a Tsunami Ahead of Time 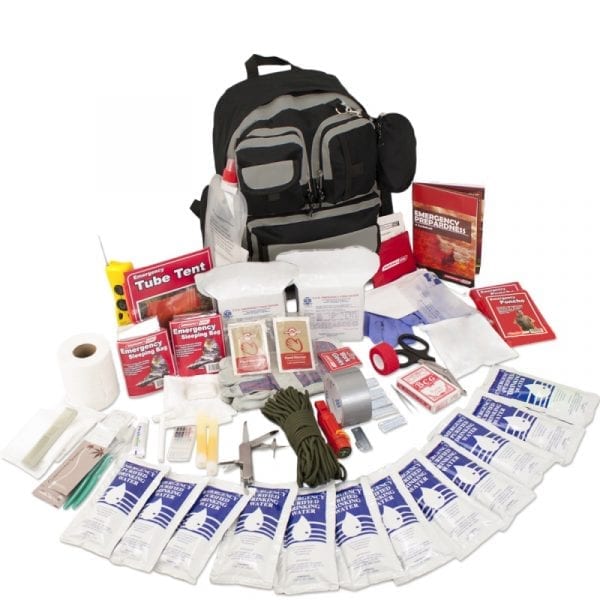 Our Urban 72 Hr Survival Kit, which is designed for 2 people.

Whether you live in or near a zone or are just visiting, always be prepared to evacuate. Here are some tips on how to do that:

When Asked to Shelter in Place

Once you have reached safety, you may need to stay put for some time. Even if you live outside of the inundation zone, you may still be asked to shelter in place due to factors such as earthquake damage, hazardous material spills, or other unsafe conditions.

Learn more about sheltering in place in some of our other blog posts:

Keep in mind that it may take some time for emergency personnel to reach you. If possible, expand your emergency supplies to include provisions to last you for one or two weeks. Take a look at some of our earthquake kits to get an idea of what you should have on hand for a longer-term emergency.

Stay where you are as long as it is safe to do so. Find a visible place to put a Help/OK sign to signal to emergency personnel whether you need assistance or if they can direct their efforts to those who need it more.

Tsunami Aftermath: What Comes Next?

In the unfortunate event that a tsunami does strike your area, it may be some time before things return to normal.

You may have to find a new place to live, whether temporarily or permanently. The disaster may affect local businesses and your income, and there may be insurance claims to handle. (Pro tip: make your claim ASAP, since insurance companies can be tied up for years processing claims following a natural disaster, as we learned from what happened after the Christchurch earthquakes in 2011). 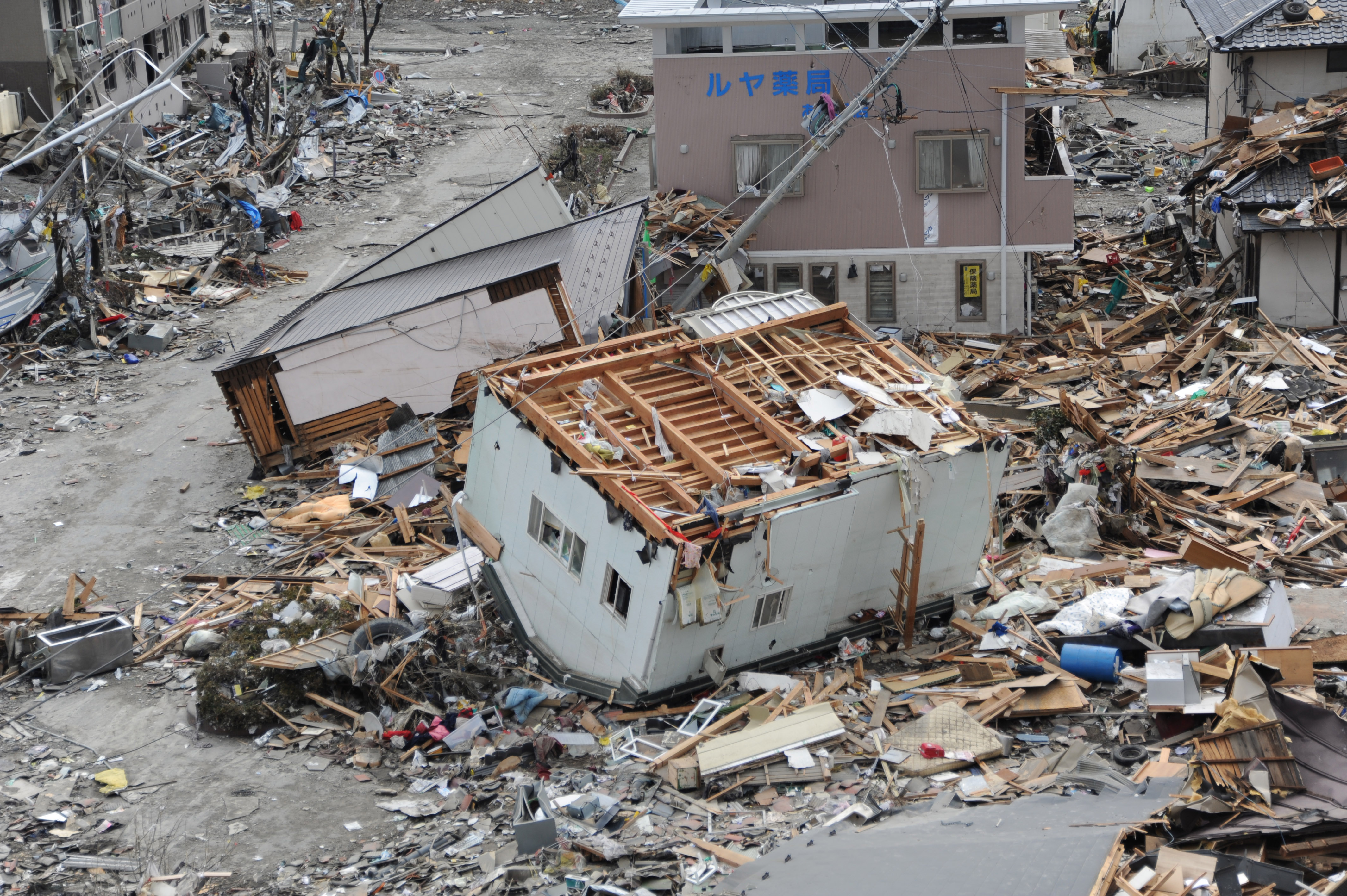 An upended house is among debris in Ofunato, Japan, following a 9.0 magnitude earthquake and subsequent tsunami in 2011. Image via Wikimedia Commons.

That’s not to mention the emotional and physical toll a natural disaster can cause. Stress, grief, and other difficult emotions can linger for years after such a traumatic event.

Depending on where you live, your local or provincial government may have disaster financial assistance available (DFA) after a natural disaster. If you live in British Columbia, you can learn more about our provincial DFA here. There are also resources available for evacuee recovery and mental health, which you can find here.

Preparedness can be daunting, but it’s much easier to handle if you break it down into these three steps:

If you need a hand deciding which emergency preparedness products would work best for you, our friendly and knowledgeable team has your back. Give us a call toll-free at 1-888-832-1733, email us at [email protected], or chat with us right here on the website. We’ll be happy to answer any questions you might have.

Categories: Earthquakes, News
Prev postNext post
If there was an earthquake today – right now – would you know what to do? While Canada
Read More
Earthquakes are a natural phenomenon that occur throughout the world. Canada is no exception, as the country’s west
Read More
A 5.6 magnitude earthquake in Indonesia devastated the Cianjur region on Monday November 21, 2022. While earthquakes of
Read More
Total Prepare Inc’s Emergency Food Rescue Program helps facilitate the donation of expiring goods to Canadian food banks;
Read More
New Products Preview! This fall, we’re bringing in some new products and expanding the options for brands that
Read More
From Sun Tzu to Benjamin Franklin to Stephen King, we humans have long understood the importance of preparing.
Read More
Ever since Total Prepare was founded in 2012, we have been working hard to make Canadian communities safer.
Read More
Emergency Managers are the backbone of the preparedness industry. From companies to governments, they’re the ones who coordinate
Read More