The ABCs of EMPs

The ABCs of EMPs

What is an EMP?

EMP stands for Electromagnetic Pulse. Simply put, it is an intense burst of electric and/or magnetic energy caused by the abrupt and rapid acceleration of charged particles (usually electrons). EMPs can cover huge swaths of the electromagnetic spectrum, from low-frequency radio waves to high frequency ultraviolet ones.

To put it in three words: radiating electrical burst.

What causes an EMP and what do they do?

The most common EMPs are small-scale and localized around lightening strikes. The pulse pushes extra electricity into nearby wires and can damage electronics connected to the source, blowing a fuse for example. 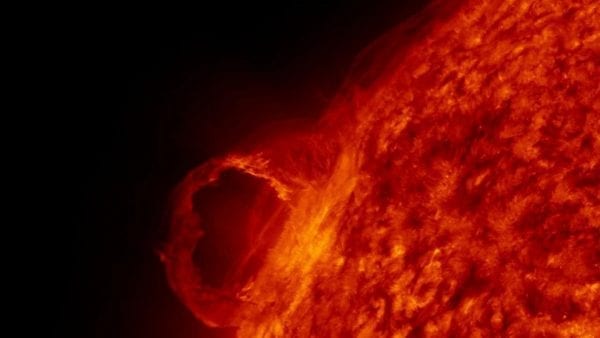 Large scale EMPs, the ones that are perhaps a little spookier, are caused by either solar weather, or nuclear/ballistic weapons. A solar storm actually knocked out power in most of Quebec back in 1989. The outage lasted for 9 hours and took less than a minute to trigger. That solar storm was small potatoes compared to what’s called the Carrington Event, the largest solar upset on record. This disturbed telegraph services worldwide in 1859.

Man-made, cataclysmic EMPs can be brought about without any direct physical harm to the victims, and is therefore feared by many first world governments as a potential form of passive-aggressive warfare. The aggressor launches a nuclear or ballistic missile to explode 40-400km above their victim’s territory, and the resulting gamma radiation interacts with our atmosphere to create an EMP on a disastrous scale.

Why are EMPs worth preparing for?

Who’s afraid of a little power outage, right? Well, this wouldn’t be so little. 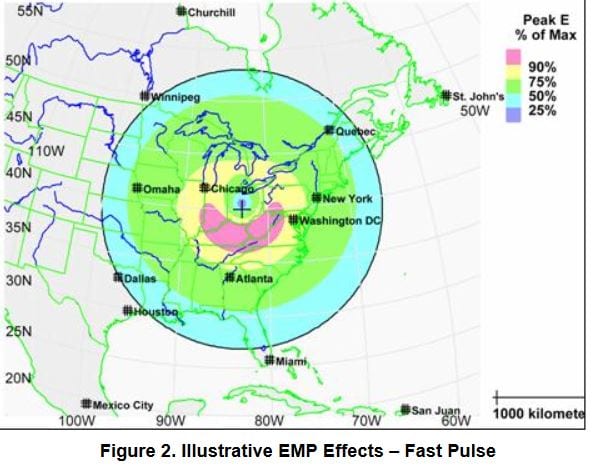 If a targeted EMP was launched at the USA its radius would encompass 70% of the country’s power load. (Sorry, couldn’t find a Canadian map – but here’s an apology to hold you over.)

Testing of EMPs in 1962 by the US and Russia found that a missile detonated over Johnston Island in the Pacific effected electrical systems all the way in Hawaii. 1,400 Kilometers away.

EMPs are also a little different from a normal power outage. An EMP has three phases, each disturbing or destroying more systems, cracking their way in waves through defenses that would protect from something more common, like a lightening strike. Because EMPs can (and will) damage a system, blowing fuses and frying circuits so they need to be fully replaced, turning it off and on again isn’t fixing this one.

Due to the scale of damage possible in a modern nuclear EMP, experts believe that it could take months or even years to fully recover all of our electrical infrastructure after a major EMP. This means a lot more than not being able to google a recipe or having to light a few candles.

Technology strengthens the first world in amazing ways, but it’s also our weak point. Can you imagine keeping food cool without electricity? Keeping the house warm for a whole winter? What if grandad’s pacemaker stopped working? Or little Sarah’s insulin pump? How would your business do without computers? Your government? Schools? Hospitals? Even our gas pumps are electric.

But don’t worry! It’s not all doom and gloom! Preparing for an EMP is actually pretty easy, and you’ll already have a lot of the basic items in your regular survival kit (isn’t it great when things are multipurpose?) Food, water, and all the other basics will be important in the event of a major EMP, but you can also find Faraday Cages, or make your own, to protect electronics. 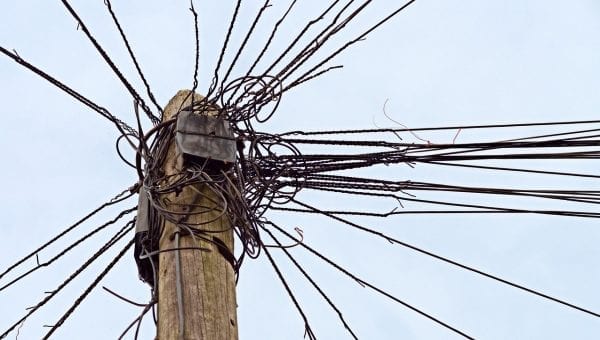 Will an EMP damage unplugged/turned off devices?

According to The Modern Survival Blog, maybe. The main factors that will determine the survivability of a device will be the distance from the EMP (it loses force the further it travels) and whether or not the device had any protections (like a Faraday Cage). In general though, if it’s in range and electronic, it will most likely take at least some damage.

If EMPs are such a threat, why does no one talk about them?

I think Thomas C. Schelling put it best in the Stanford University Press as he wrote warnings regarding Pearl Harbour in 1962:

People reject new and unfamiliar ideas, especially when those ideas are threatening, expensive to protect against on a national scale, and (we hope) unlikely. I confess, I was actually a skeptic going into this article, but after finding several sources backed by scientific study and research, and knowledgeable professionals who have made EMPs their life’s work, I might be adding a few layers of Aluminum foil to my emergency flashlights and radios.

This article was written by Zenia Platten – Writer and Emergency Preparedness Professional.

Categories: Man-Made Emergencies
Prev postNext post
Can humans cause earthquakes? Humanity is pretty powerful but does our power reach this far? Natural earthquakes are
Read More
We’ve all seen them in the movies – massive tsunamis of snow plummeting after the main protagonist, consuming
Read More
Disclaimer: This article contains subject matter that may cause distress to some readers. Canada is peaceful. We apologize.
Read More
Working in the emergency preparedness industry allows us to meet people and preppers from all over the country
Read More