What We Can Learn From Christchurch

Home › Earthquakes › What We Can Learn From Christchurch

What We Can Learn From Christchurch

This year marks ten years since New Zealand’s fifth-deadliest disaster in Christchurch, a city on the country’s South Island. In early 2011, a series of earthquakes shook the region, costing over 100 lives and billions of dollars in damages. Ten years later, recovery efforts are still in progress. There have been many high-magnitude earthquakes around the world since then, so what significance could the Christchurch earthquake — which occurred half a world away from our home here in Victoria, BC — hold for us Canadian west coasters? It turns out, quite a lot.

Approximately half a million measurable earthquakes happen every year – that translates to one every 3-4 minutes. Happily, only an average of 8 of these are magnitude 7 or higher – which means they’re more likely to cause damage or loss of life. The most major quakes to occur in a single year were the 24 magnitude 7+ events that occurred within 2010.

“The” 2011 Christchurch earthquake is a misnomer. There were actually several quakes — the strongest being that one in early September of 2010. Each of these caused damage, but more critically, they weakened the local infrastructure. The last straw came on February 22, 2011 when a m6.3 aftershock struck.

While not as strong as the initial event, the aftershock occurred beneath the Christchurch suburb of Heathcote Valley. Occurring only 3 miles (5km) underground, it was shallow by seismic standards. The area saw substantial shaking, surface cracking, and liquification (when previously solid ground becomes fluidlike).

There are hundreds of stories and perspectives from the survivors of the February 22, 2011 event. The shaking destroyed homes and businesses, resulting in 185 deaths. By 2013, estimates put the cost of rebuilding after the disaster at $40 billion dollars. There is no word on how close that estimate has been so far.

Both the damage and the multi-year battles with insurance companies meant that homeowners struggled to afford repairs. After the disaster, 2.4% of Christchurch’s population (8,900 people) moved elsewhere in New Zealand. Some left the country altogether.

The Trinity Building in Christchurch after the 2011 earthquakes. Photo by Geof Wilson on Flickr, licensed under the Creative Commons Attribution-Share Alike 2.0 Generic license.

To this day, the city has declared a ‘red zone’ of 630 hectares of land too unsafe to build new homes on. This land was cleared of the thousands of destroyed homes and now stands in limbo. While some residents refused the government’s offer to buy out their homes and chose to continue living in the red zone, their crooked houses serve as a sobering reminder of the risks.

Residences were not the only affected structures. Businesses, landmarks, roads, water mains, sewage pipes, and electricity and phone lines all met the same fate. The city’s central business district remained closed for two years after the quake, nestled among the “living ruins” of the city.

As with any disaster, the most tragic and irreplaceable toll were the lives lost. Falling buildings crushed or buried cars, buses, and pedestrians. Most of the casualties – 115 out of the 185 deaths – occurred after the six-story Canterbury Television building collapsed, leaving only its flaming elevator shaft standing. The building housed a TV station, a medical clinic, and an English language school. Twelve Japanese students were among the fatalities.

The earthquake left 80% of Christchurch without electricity. Water and sewage disruptions spanned across the city. Within three days, 75% of residence had power restored; however, water and sewage systems took several years to restore in certain areas. The remaining 25% of homes without power were addressed over the next 2-3 weeks.

Damaged water mains and liquefaction caused flooding in several suburbs. While no one drowned due to the flooding, there were some close calls. Vehicles driving or falling into sink holes filled with water or liquified earth, and people became trapped in silt-filled holes. After the waters receded, communities gathered to dig out the properties of residents from the thick silt left behind.

After the earthquake, the New Zealand Prime Minister and the Mayor of Christchurch announced the creation of the Canterbury Earthquake Recovery Authority (CERA). This organization would manage post-quake recovery in the area, working in tandem with government and local councils.

The Christchurch earthquake damaged over 100,000 homes, with around 10,0000 requiring demolition. Agricultural parks and racecourses served as sites for temporary housing. Under their insurance policies, some residents were offered properties in new subdivisions. Many chose to live in their homes while emergency repairs were completed – some waiting for years for their insurance to resolve.

Most schools in the area remained closed for weeks after the event. While many were cleared to return to their original sites, some classes were held either in tents on school grounds or shared space with other, less damaged schools. Many families relocated after the disaster, lowering enrollment numbers and causing some schools to merge permanently.

Where Are They Now?

By 2016 – five years after the earthquakes – 90% of private insurance claims were settled. Some residents of destroyed homes lacked other places to live and made do with severely damaged properties for years as they waited for settlements.

The ‘Red Zone’ land that has been marked as unsafe for future construction is currently maintained by Land Information New Zealand, which manages vegetation, provides security, and clears trash. The space is used for mountain biking, community gardening, and occasionally for festivals. Some of the damaged roads are used for road safety training for kids or for testing autonomous vehicles. 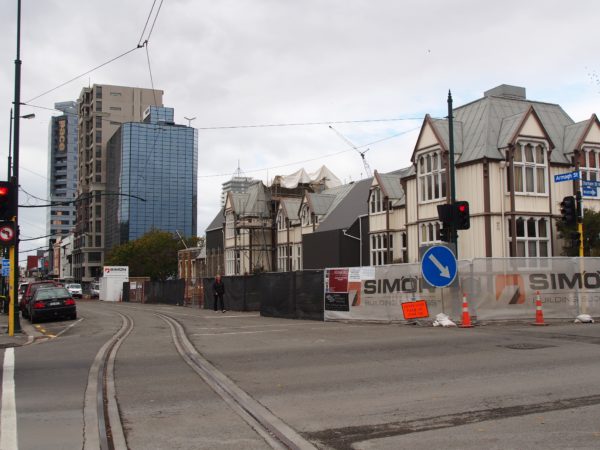 What Does This Mean For BC?

The events in Christchurch in 2011 were tragic, but distant. So why should Christchurch’s seismic events be especially meaningful for us? Christchurch and Victoria, BC have a lot in common. Even a decade later, we can learn important lessons from the stories, experiences, and recovery efforts in the aftermath.

In 2011-2012, Christchurch had a comparable population to the Victoria area – 380,000 compared to 360,000 people living in the CRD. We also share/shared similar heritage-style downtown cores, featuring older buildings and lots of brickwork. Both Christchurch and Victoria are also located in seismically significant areas. The likelihood of BC’s west coast experiencing a similar (or greater) magnitude earthquake in the next 50 years is 1 in 3. Both cities are also at risk for tsunamis after seismic events.

We are lucky here in BC to have a few advantages in the event of an earthquake that Christchurch did not, but we also have our own challenges.

Apathy. Despite BC and New Zealand having similar populations, a much smaller percentage of people in BC have earthquake insurance (about 50%). In general, west coast BC seems to have a higher level of apathy when it comes to earthquake preparedness in general, including insurance, emergency kits, and personal emergency planning. In a recent provincial survey, only 13% of BC residents said they had a complete emergency plan, and only 39% had at least 3 days of supplies gathered in one place. When asked why they are not fully prepared, the most common answer is ‘laziness.’

Neighbouring cities. Unlike Christchurch, Victoria has some big neighbouring cities that are also likely to need help in the event of a large earthquake. Vancouver and Seattle will likely take precedence for aid due to their size, meaning that Vancouver Island may have longer to wait for outside help than Christchurch did.

However, the proximity of our neighbours may also prove to be a boon. If they suffer minimal damage from a natural disaster, they’ll be well-placed to provide aid to Victoria and the island.

What do we do?

Wondering what can be done in the face of natural disaster? The first step is to take a deep breath and decide to be prepared, not scared. From there, it is as easy as following the steps laid out by PreparedBC: know the risks, make a plan, get a kit.

Understanding the risks in your area will help you know what exactly you are preparing for. In the CRD, the top emergencies to prepare for are earthquake, fire, and severe weather. But beyond that, one should educate themselves on what dangers are caused by these disasters. Earthquakes, for example, are famous for the damage caused by shaking – fallen buildings, cracks in the roads, etc – but they are more complicated than that. Liquefaction; damaged water, sewage, and gas lines; fires and explosions caused by crushed or damaged fuel tanks; tsunamis; and downed power lines are all earthquake hazards that can be often overlooked.

After studying the hazards in your area and researching what extra effects they may have, it is time to make a plan. Ensure everyone in your household knows the plan and practice it once a year. Think through how you and your loved ones would reunite if an earthquake happened while family members were in different places (school, work, the grocery store) and how you could support furry friends and loved ones/neighbours with special needs. 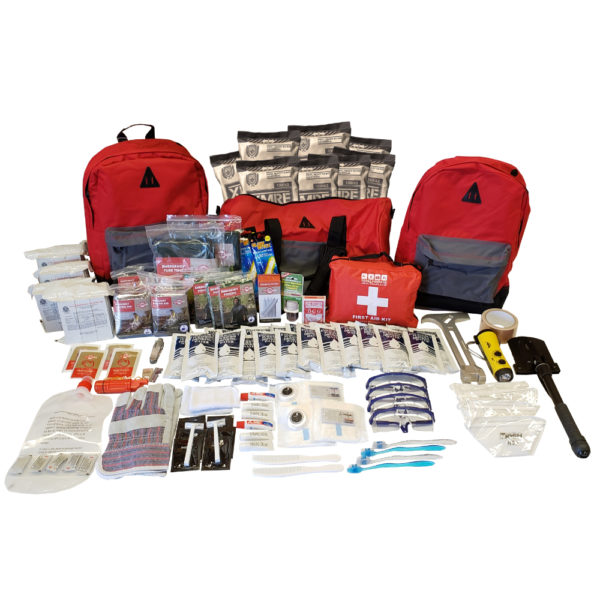 Once you know what you are preparing for, and what you plan to do about it, the next step is to create or purchase an emergency kit. Having supplies on hand gives you flexibility. If your house is suddenly compromised or you need to evacuate, you have everything you need for a few nights outside or in a reception center, on hand and ready to go. Pack a minimum of 3 days’ food and water (at least 3600 calories of food and 6 liters of water per person), shelter supplies, flashlights, a radio, and spare copies of important documents. Looking for our favourite 72-hour kit option? Check out the Total Prepare staff-built Premium 72 Hour Earthquake kit. While a 72-hour kit is a great place to start, professionals recommend having 1-2 weeks self-sustainability for earthquake scenarios.

A lot has changed in the last year, let alone the last decade, but plenty has stayed the same too. BC’s emergency planning officials are working tirelessly to raise awareness, create strategies, and ready everyone in our province for disasters of every sort. Between early warning systems, growing Search and Rescue teams, and public educational opportunities, they are doing an amazing job. But preparing millions of people for a life-changing risk is no small feat, and the risks we face today have changed very little from what they were 10 years ago.

By studying seismic events from areas similar to our own, we can better understand the risks posed by living on a fault line. With understanding, we are able to create a plan. Once we know our plan, we can build the best emergency kit possible for our unique situations.

Thank you for reading. Know anyone with experience in a major earthquake? Let us know their stories and advice in the comments!

This article was written by Zenia Platten – Author and emergency preparedness professional.

Categories: Earthquakes
Prev postNext post
Early in the morning on Saturday, January 15, 2022, many west coast Canadians received a notification from their
Read More
Moving away from home to go to University or College is an exciting and unforgettable time in one’s life.
Read More
Can humans cause earthquakes? Humanity is pretty powerful but does our power reach this far? Natural earthquakes are
Read More
Are you and your business prepared for an earthquake? At the end of every October, the Emergency Preparedness
Read More
People spend A LOT of time in their vehicles. Whether you’re commuting in your car, running the kids
Read More
Disasters have a clear beginning and end, but recovery can last a long time after the dust settles.
Read More
September has come around yet again so it’s time to talk about what PACs and faculty can do
Read More
Did you know that earthquakes are not the only way that tectonic plates move? Earthquakes are a quick,
Read More