Food Shortages in Canada and the World

Canadians are lucky to live in a wealthy, stable country, but could we see food shortages in Canada in 2023? With Canadian food banks facing massive increases in demand since the covid-19 pandemic, many people are beginning to ask these questions. With factors stacking up, it’s looking likely that a global food shortage may be in store for 2023.

The Levels of Food Shortages

Before we jump into this topic, let’s quickly review the differences between types of food shortages. The terms ‘food shortage’ and ‘food insecurity’ are both used when there is not enough food to meet the needs of an area. The IPC (Integrated Food Security Phase Classification) classifies different levels of food insecurity as follows:

(Check out page 51 of their report to see more details about their classifications, or this article from World Vision for a more reader friendly summary.)

According to the World Food Programme, “the world is facing a food crisis of unprecedented proportions, the largest in modern history.” They say that a total of 49 million people in 49 countries are teetering on the edge of famine (the worst kind of food shortage). Looking at overall food insecurity, 828 million people are going to bed hungry each night. That’s 10.6% of the world’s 7.8 billion people. 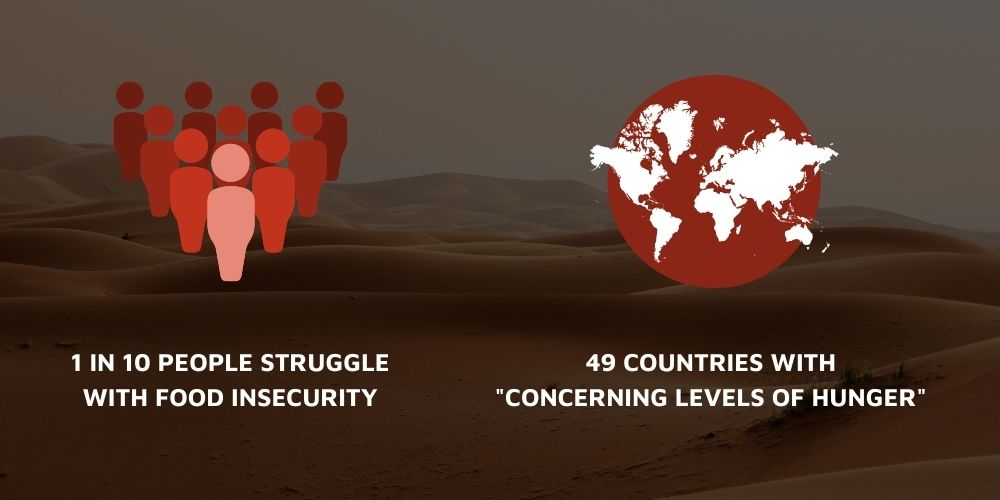 Conflict – In many high-hunger countries violent conflict is a major cause of food crisis. Land and assets are taken, destroyed, or have to be abandoned in these situations. Conflicts are often caused by economic or political turmoil that escalates to the boiling point.

Climate – floods, drought, and unseasonable freezing are on the rise globally. This can be devastating for farmers and families trying to maintain gardens, crops, and/or livestock.

Covid-19 Pandemic – Is there anything the pandemic hasn’t effected? In the case of food shortages in Canada and the world, the economic impact of covid-19 has made food more expensive. Often, this expense goes hand in hand with scarcity and empty shelves.

Cost of Aid – The World Food Programme reports a 44% increase in it’s monthly operating costs since 2019. This reflects price increases across the board. “The extra now spent on operating costs would have previously fed 4 million people for one month.”

Russia/Ukraine Conflict – Ukraine is one of the major grain producers in the world, exporting to feed millions of people worldwide. According to World Vision “by May 2022, Ukrainian farmers had 20 million tons of grain they could not get into international markets.” Russia also produces and exports large amounts of grain. They have frozen their trade with non-Soviet countries. While this effects countries reliant on their grain first (India, Egypt, Turkey, and China to name a few), the vice-president of the Ontario Federation of Agriculture’s immediate concerns are in fertilizer…

Will there be food shortages in Canada? 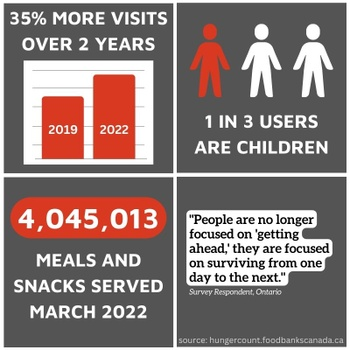 Russia is a major global supplier of fertilizer, and the tariffs imposed on the import of it is worrying Canadian farmers. Mark Reusser, vice-president of the Ontario Federation of Agriculture and the Waterloo Federation of Agriculture, spoke to the CBC about his concerns. Between the rising costs of fertilizer, fuel, crop protection products, land, and labour, growing food is becoming an expensive business.

If supplies are limited and crops are expensive to produce, Reusser predicts that farmers will begin to triage – prioritizing the crops that make the most money to sustain their livelihoods. This would lead to a big reduction in the variety that Canadians see on their supermarket shelves.

“I can’t predict the future. All I will say is that the supply of fertilizer right now is precarious, and we are very worried as farmers about the supply for the coming year, so that would be the crop year of 2023.”  – Mark Reusser

I’ll admit, this is a little worrying, especially when coupled with Canada’s Hunger Report, citing a 35% increase in visits to Canadian food banks between 2019 and 2022.

What can I do?

Magnificent question, brilliant reader! The best way to help others who are struggling with hunger is to donate to your local food banks, run a food drive, or donate to charities fighting to stop hunger. Every donation counts and puts food in empty bellies! If you want to organize a food drive, but don’t know where to start, check out this article by Rotary International.

Total Prepare can also help you to prepare yourself and your loved ones for the possibility of food shortages. Stocking up on shelf-stable emergency food is a great way to make sure that you have something to eat, even when the shelves are bare. Climate allowing, we also recommend starting a food garden to bulk up your pantry where possible. Legacy food is a personal favourite for their large serving sizes and great taste. A Combo Bucket was my first emergency food purchase, in fact! This one will last one person over 3 weeks, eating 2000 calories per day.

Thank you for reading!

Categories: Food
Prev postNext post
Preparing and storing your own food is a cost-effective way to build your emergency food supply- not only
Read More
What happens when disaster strikes and you have to stay home, but the power is out? It can
Read More
While most emergencies are resolved within 72 hours, it is possible for a disaster to knock a community
Read More
“Do those have gluten?” Is a question we get asked often here at Total Prepare. For some, avoiding
Read More
Being prepared for an emergency is crucial to personal and community well-being. Despite this, even known earthquake zones
Read More
MREs or Meals Ready to Eat are a marvel of modern survivalist technology. With built in heaters, a
Read More
In this final installment of our series we’re going to talk about food storage royalty. With its’ all-in-one
Read More
Throughout the last few weeks we’ve discussed a few of our favourite long term food storage options. We
Read More