Food Shortages in the Event of Emergencies

Home › Food › Food Shortages in the Event of Emergencies

Food Shortages in the Event of Emergencies 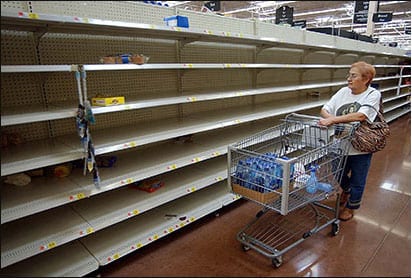 There are several different factors that can cause food shortages and instability. These factors include crop destroying floods and droughts, and political and economic instabilities. Although it may seem dismal, there can be positives which come from these situations- if responded to appropriately.

Over August and September, a number of events resulted in a flood of orders that resulted in a shortage here at Total Prepare. In fact, the entire preparedness industry was facing depleted shelves.

If you’ve spent any time on our website or blog, or have previously purchased from us you know us as retailers of long-term foods and emergency solutions. Our best-selling food brand is Legacy Foods. Legacy Foods was overwhelmed by orders that wiped out their stock. In fact, their sales unexpectedly increased an incredible 420%. Even some of the ingredients they regularly buy to make their food were out of stock as well! The system was undeniably overwhelmed.

There’s been a general unrest about this fall- ruminations of an economic collapse, a meteor en-route to earth, and general instability have people concerned. Some would go so far as to suggest that end of the world is at hand. It’s not just earthquakes that concern people!

In BC, the storm that hit Vancouver and Vancouver Island mid-August also motivated people to get prepared.

This is actually a good thing. If people act now and build emergency kits for their homes and families, then when push comes to shove in an actual emergency, they will have a higher chance at surviving and a lot less reason to fear. There are many reasons for early preparedness, but with our modern expected conveniences it’s frequently a low-priority. Even a few short generations back, our ancestors were more actively conscious of the future and expected instability.

Vancouver’s summer storm was a big disruption to its infrastructure. People were without power for days. Can you imagine what kind of havoc an earthquake would wreak on our system, if a simple storm is any kind of indication? Check out what BC Hydro itself had to say about the fallout from the storm. A Times Colonist editorial also highlighted the importance of getting prepared, in light of the disruption the storm caused – read it here.

What August and September have made us realize, as suppliers, is that times and weather patterns are changing and more people are becoming aware of the importance of preparing. More citizens are stocking up on more food and supplies, to prepare for other possible shortages. Legacy Foods is taking the rise in demand seriously, and is increasing their rate of production considerably.

Stay tuned for our next post, Bolstering Your Emergency Food Supply, to read more about what it means to be prepared, how to take action yourself, and how to bolster your home and your community’s food supply!

Article contributed by Sophie Wooding – Avid gardener and cyclist in Victoria, BC and Content Writer for Frontier.io

Categories: Food
Prev postNext post
Preparing and storing your own food is a cost-effective way to build your emergency food supply- not only
Read More
Food Shortages in Canada and the World Canadians are lucky to live in a wealthy, stable country, but
Read More
What happens when disaster strikes and you have to stay home, but the power is out? It can
Read More
While most emergencies are resolved within 72 hours, it is possible for a disaster to knock a community
Read More
“Do those have gluten?” Is a question we get asked often here at Total Prepare. For some, avoiding
Read More
Being prepared for an emergency is crucial to personal and community well-being. Despite this, even known earthquake zones
Read More
MREs or Meals Ready to Eat are a marvel of modern survivalist technology. With built in heaters, a
Read More
In this final installment of our series we’re going to talk about food storage royalty. With its’ all-in-one
Read More