An Inside Look at Emergency Management with Ian Foss

Home › News › An Inside Look at Emergency Management with Ian Foss

An Inside Look at Emergency Management with Ian Foss

Emergency Managers are the backbone of the preparedness industry. From companies to governments, they’re the ones who coordinate their organizations and call the shots when disaster strikes.

But what is it like to be an Emergency Manager? To get an inside look at the role and the impact it has on the people who perform it, we spoke to Ian Foss, a Director at EMBC and a long-time proponent of emergency preparedness. With his background as a small-town British Columbian and decades of hands-on experience under his belt, Foss is a fountain of emergency preparedness knowledge. 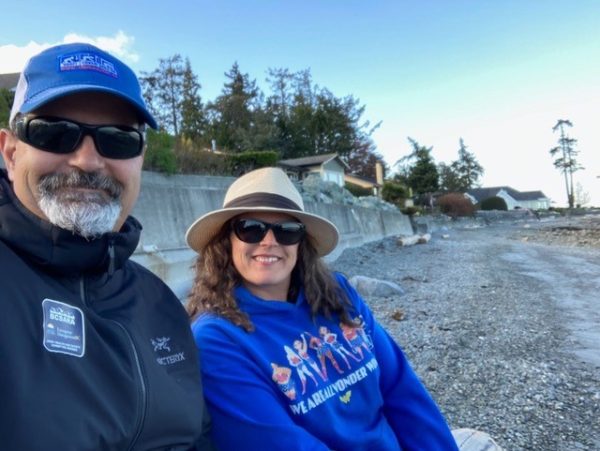 Ian Foss and his wife, Kirsten, on a walk. Photo provided by Foss.

Note: Some answers have been edited for brevity or clarity.

TP: How long have you been in the Emergency Management industry?

TP: In those 20 years, what is the most memorable situation you’ve been involved in managing?

IF: I have worked on many large events, more recently 2017–2019 activations for wildfire & flood as well as working on the response to the 2021 fall atmospheric river, the most memorable was from when I was a GSAR (Ground Search & Rescue) volunteer. Our group worked with military SAR Techs to respond to a plane crash in 2007, where we pulled the lone survivor out of the wreckage, a 4 year old girl named Kate. She had been hanging upside down in her car seat for a few hours when we reached her, the lone survivor. I have been able to watch her grow up. It was life changing all around.

TP: What an impact that must have on everyone involved! So many lives are touched by the work of emergency personnel. There’s been a lot to learn to get where you are; what were you most surprised to learn about emergency preparedness?

IF: Even in an area like Victoria, there are people who don’t take preparedness seriously. I consider preparedness even when driving somewhere, tailoring what’s needed depending on the trip. The atmospheric river last fall is a great example of why you want to prepare. You never know when you many need to camp out in your car while traveling.

TP: That’s a great attitude to have. Apathy often stops people from preparing, but what motivates you to be prepared?

IF: I lived in a small town in the mountains called Golden. In the winter it was not uncommon for the roads to all be closed, sometimes for a week. You wanted to ensure you had food for an extended period. I hunted so [I] had a deep freeze full of meat most of the time, but also a pantry full of canned food. When I was younger, I did expedition raft trips, so traveling self-sufficiently for up to 3 weeks takes a significant amount of preparedness & planning.

TP: No wonder you’re a pro at this. Since you’re also prepared on a personal level, what’s your favourite item in your emergency kit?

IF: I have 3 separate toilet systems… I have my old expedition rafting set up (called a groover), a sawdust filled bucket system and then a quick & easy bucket lid. Toilet system is a critical part of kit for anyone, otherwise consider what the neighbourhood would look/smell like.

TP: Not good, that’s for sure! Especially in a wide-scale emergency like an earthquake. On that note, could you perhaps share a little-known risk or hazard that people should keep an eye out for after an earthquake?

IF: There are a few, however the one that came to mind was, only turn the gas off to your home if you smell a leak or are directed to by the utility. The issue is more that turning it back on requires a technician.

TP: That’s definitely sound advice. That would save a lot of hassle after the fact, too. Thank you for sharing! And thank you for your time and expertise as well. We and our readers appreciate it! Before we wrap up, do you have any parting emergency preparedness advice you’d like to give to our readers?

IF: Preparedness doesn’t need to be difficult. If you camp or have camped, you understand what’s required. If you need to pull everything together new, there are affordable starting places for a kit. Personally, I purchased a pile of food once a year over a few years to build our supply up, and we are sufficient for 60 days. I don’t have 60 days of water yet, so that’s next.

Ian Foss is currently the Director of the Provincial Search and Rescue Program at EMBC, an instructor at NAIT, and holds a seat on the CSA Technical committee for the z1600 EM & BC standards.

His other EM roles have included Operations Officer at the Emergency Coordination Center, one of the team of Emergency Program Coordinators for the CRD, and Regional Manager with Provincial Emergency Management.

He is an alumnus of Royal Roads University, where he completed his Master of Arts Degree in Emergency and Disaster Management in 2015. He wrote his major research project on the use of social media for communication during emergencies and disasters. Since then, he has pursued additional education in EM both professionally and as a volunteer.

At the Provincial level, he has extensive experience managing floods, fires, evacuations, tsunami and earthquake response, and working with local governments to support their response to emergencies and disasters.

Foss has had speaking engagements at numerous emergency preparedness and SAR conferences across Canada, including SAR Scene in Newfoundland; Disaster Forum in Banff, AB; EPBC in Vancouver, BC; and EPICC in Victoria, BC. His speaking topics include interagency cooperation and using social media as a form of communication in a disaster. He is currently developing a presentation regarding the impact of stress on health in Emergency Management for the January NAIT speaker series that will be available to anyone interested.

He lives in Sidney, BC with his wife and small feisty dog and is lucky to have his 3 adult children living in the area. They love to camp and in the past few years have been exploring gardening and regenerative farming as a preparedness and food security plan for themselves and extended family.

Want to follow his advice and start or add on to your emergency supply? Check out our selection of emergency food and water supplies to get started!

Categories: News
interview
Prev postNext post
A 5.6 magnitude earthquake in Indonesia devastated the Cianjur region on Monday November 21, 2022. While earthquakes of
Read More
Total Prepare Inc’s Emergency Food Rescue Program helps facilitate the donation of expiring goods to Canadian food banks;
Read More
New Products Preview! This fall, we’re bringing in some new products and expanding the options for brands that
Read More
From Sun Tzu to Benjamin Franklin to Stephen King, we humans have long understood the importance of preparing.
Read More
Ever since Total Prepare was founded in 2012, we have been working hard to make Canadian communities safer.
Read More
Early in the morning on Saturday, January 15, 2022, many west coast Canadians received a notification from their
Read More
Struggling to cross the last few people off your Christmas shopping list because you’re not sure what to
Read More
To our valued customers: Due to the recent widespread flooding and road closures across BC, many orders outside
Read More