Earthquakes in Canada: An Introduction

Earthquakes in Canada: An Introduction

Earthquakes are a natural phenomenon that occur throughout the world. Canada is no exception, as the country’s west coast is part of the Ring of Fire – an area prone to severe earthquakes. In this blog post, we’ll explore the history of earthquakes in Canada, look at the earthquake risk areas in the country, understand the hazards associated with earthquakes, and find out how to prepare for earthquakes. Let’s get started.

Introduction to Earthquakes in Canada

Earthquakes are one of the most powerful and destructive natural disasters in the world. In Canada, earthquakes can cause considerable damage to structures, disrupt transportation and communication networks, and result in casualties.

In Canada, earthquakes are most common in the western part of the country, along the West Coast of British Columbia and the Pacific Ocean. However, earthquakes can occur anywhere in the country.

Historical Overview of Earthquakes in Canada

Earthquakes have been recorded in Canada for centuries. The first recorded earthquake in Canada occurred in 1663 in what is now Québec. It is estimated to have been between 7.3 and 7.9 magnitude. While some chimneys fell, most of the damage was done by landslides triggered by the earthquake. Happily, no lives were lost.

The most damaging earthquake in Canadian history occurred in 1700, when an earthquake in the Cascadia subduction zone caused a tsunami in the Pacific Northwest. This tremor wiped out every first people’s community in Pachena Bay except one, and the resulting tsunami reached as far as Japan. 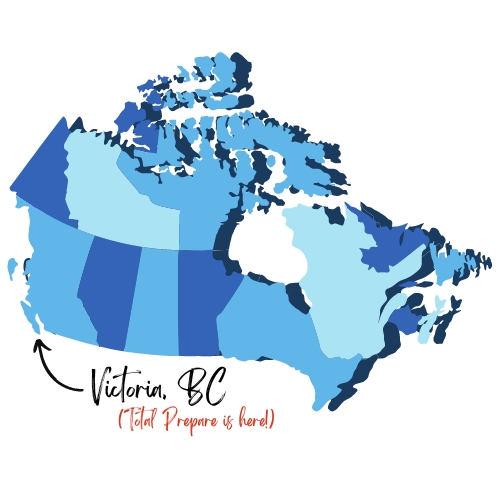 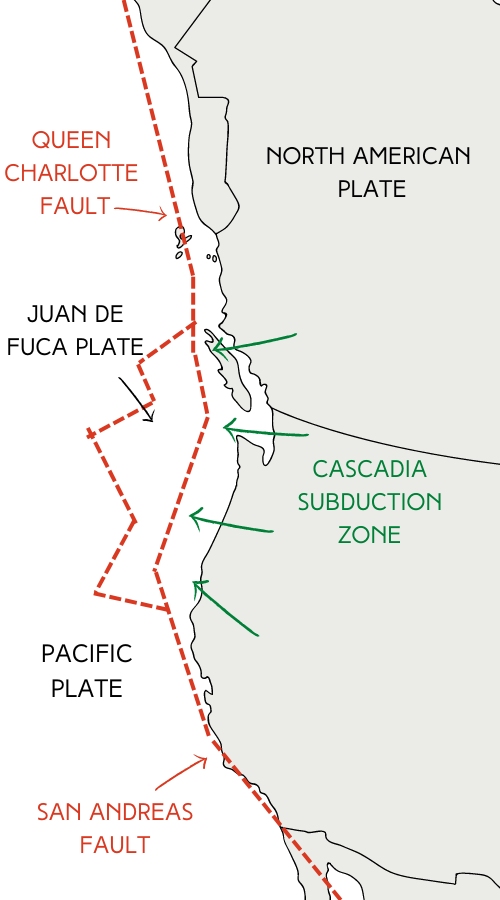 In addition to these major fault lines, there are several minor fault lines in Canada. These fault lines are located in Ontario, Québec, Alberta, and British Columbia.

Canada’s most famous earthquake zone is in BC. Between the Queen Charlotte Fault and the USA’s San Andreas Fault, lies the Cascadia Subduction Zone. In this zone, the Juan de Fuca plate is slowly sliding underneath the North American Plate. This is normal – except this fault line is stuck. Locked in place, it is slowly building pressure, which is why BC and California are both expecting “the big one” some day. The pressure will eventually pop loose causing a very large earthquake.

Earthquakes in Canada can cause a wide range of different hazards. These hazards include ground shaking, landslides, liquefaction, and tsunamis.

Ground shaking is the most common hazard associated with earthquakes in Canada. This can cause damage to buildings, bridges, and other structures. Landslides can occur in areas with steep slopes, such as mountains and hills, and can cause significant damage to homes and buildings.

Liquefaction is a phenomenon that occurs when loose, saturated soil loses its strength and stiffness, and can cause buildings to sink or be undermined. Tsunamis are a risk in areas near bodies of water, such as those along the West Coast of Canada. Tsunamis can cause extensive damage to coastal communities. 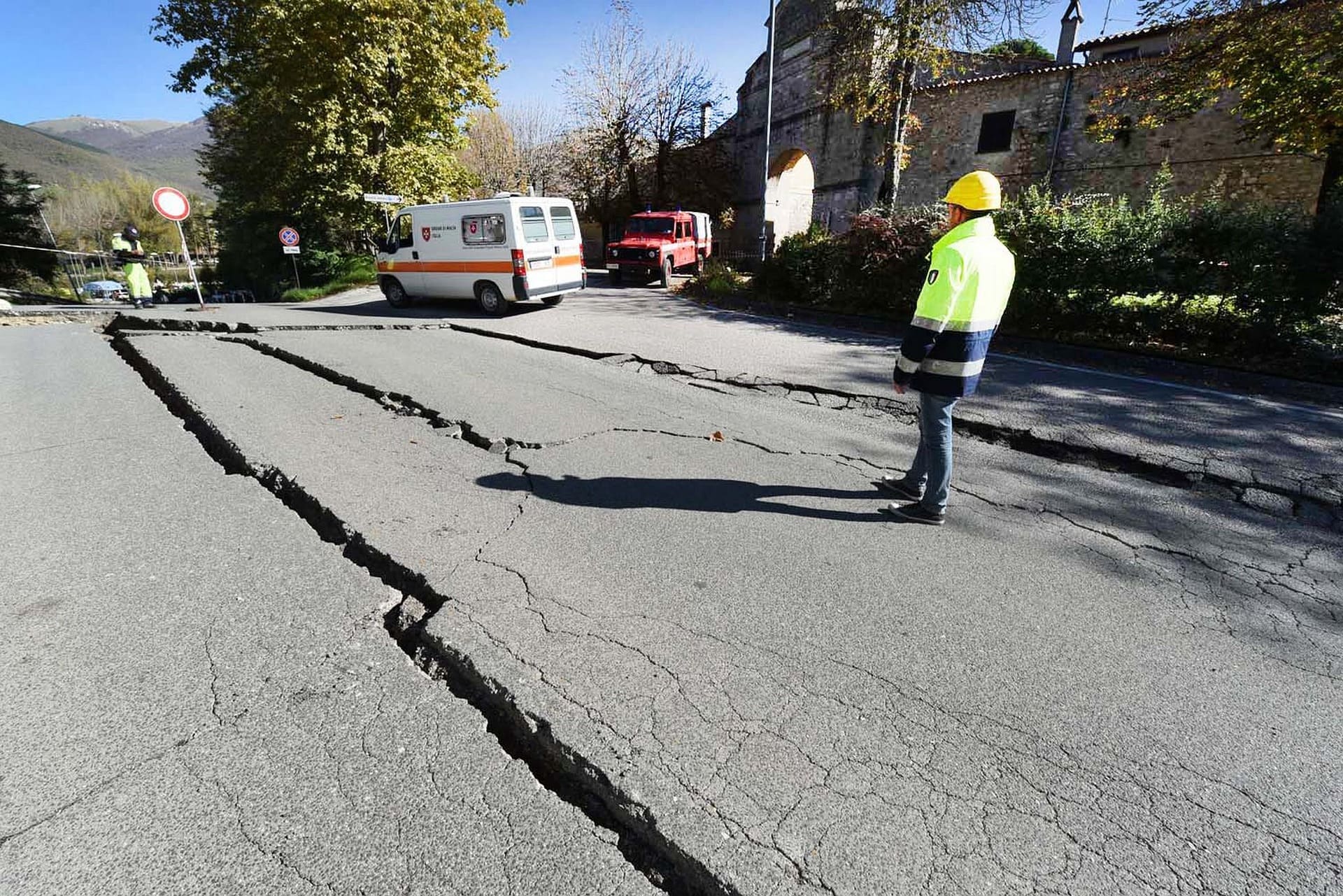 In Canada, building codes have been developed to ensure that structures are built to withstand earthquakes. This includes using reinforced concrete, steel, and other materials to make buildings and other structures more resistant to ground shaking.

When building structures, engineers also use seismic design, which is a method of designing buildings to resist the forces of an earthquake. Seismic design includes ensuring that the foundation is stable and can withstand the ground shaking of an earthquake, as well as using materials that are strong and flexible enough to absorb the energy of an earthquake. Buildings can also be retrofitted in many cases and modified to withstand earthquakes.

Earthquake kits are an essential part of earthquake preparedness. Kits usually contain items such as a first aid kit, food and water, flashlights and batteries, and a radio. Additionally, it is important to have an emergency plan in place and to know where the nearest emergency exits and fire extinguishers are located.

In Canada, the Pacific Earthquake Early Warning System (PEEWS) is the most advanced system of its kind. It is designed to detect and warn of earthquakes along the West Coast of Canada. Additionally, the Canadian government is working on a national earthquake early warning system that will be able to detect earthquakes throughout the country. 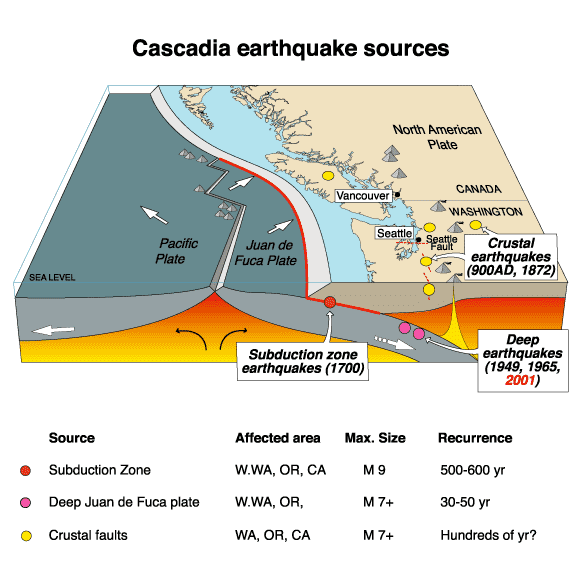 British Columbia is the most seismically active province in Canada, and is home to some of the most dangerous earthquakes in the country. The province is located in the Cascadia subduction zone, which is the region where two of the Earth’s tectonic plates meet, which is constantly shifting and creating seismic activity. This zone is particularly prone to earthquakes, and there have been numerous large earthquakes in British Columbia’s history.

The most dangerous area in the province is Vancouver Island, which is located in the Pacific Rim. This area is home to some of the most destructive earthquakes in Canada, and is the most at risk for seismic activity. In addition to large earthquakes, British Columbia also experiences numerous small earthquakes every year. These small earthquakes are known as “microquakes” and can be felt but typically cause no damage.

In addition to Vancouver Island, other areas in British Columbia that are at risk for earthquakes include the Lower Mainland, the Sunshine Coast, and the Okanagan Valley. These areas are all located near the edge of the Pacific plate and are more prone to seismic activity.

Categories: Earthquakes
Prev postNext post
If there was an earthquake today – right now – would you know what to do? While Canada
Read More
Early in the morning on Saturday, January 15, 2022, many west coast Canadians received a notification from their
Read More
Moving away from home to go to University or College is an exciting and unforgettable time in one’s life.
Read More
This year marks ten years since New Zealand’s fifth-deadliest disaster in Christchurch, a city on the country’s South
Read More
Can humans cause earthquakes? Humanity is pretty powerful but does our power reach this far? Natural earthquakes are
Read More
Are you and your business prepared for an earthquake? At the end of every October, the Emergency Preparedness
Read More
Disasters have a clear beginning and end, but recovery can last a long time after the dust settles.
Read More
September has come around yet again so it’s time to talk about what PACs and faculty can do
Read More